Over the past year, early childhood teachers in Somerville Public Schools, Head Start, and center-based community programs have been engaged in professional development focused on play and learning. One thing they found was that when they carefully prepared the classroom for play, children had richer experiences socially and intellectually. There was more language (vocabulary and communication exchanges), children stayed in a role for a longer time (which builds self-regulation), and they developed more complex play themes demonstrating higher level thinking and problem solving.

For example, ECIP (early childhood intervention program) teacher Joan Duffy set up a garden center in her Capuano classroom﻿﻿﻿ in conjunction with a unit on the study of plants.  She noticed that the children wanted to buy plants and were trying to mimic the set up of a real store - they needed that conveyer belt that moves the groceries along.  The teacher turned the play fridge on its side, covered it with poster board and ta da! - a new element of the garden center inspired by children's needs.

At the same time, Mrs. Duffy engaged in some district and city-wide practices - incorporating literacy in dramatic play. Children naturally wanted to make money and signs - and so writing became a part of the play experience.


Garden centers were popping up in classrooms all over the city - at the Bigelow Cooperative preschool children made flower arrangements with artificial flowers and a styrofoam base.  This simple activity gives children the chance to practice color sorting and fine motor skills. They also started their own plantings as part of a life sciences unit - combining real world activity and play. 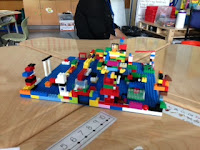 Another teacher in Somerville took a different approach to scaffolding play experiences that support cognitive development and build on children's interests.  Nelleke Harris, kindergarten teacher at the East Somerville Community School, had children work cooperatively in small groups to engage in one of their favorite activities, building with Legos.  She took photos of children's constructions as they worked and then projected the creations onto the classroom SmartBoard.  After children finished building they gathered on the rug to compare the constructions, describe what they built and how they built it (an important cognitive skill - reflecting and reviewing), and then received feedback from other groups on their work. 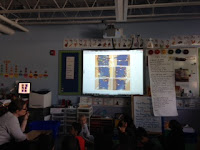 This all happened in "real time" - it was part of a warm up activity children did when they arrived (the lego constructions), and then moved into a meaningful morning meeting with sophisticated exchanges among 5-year olds!


Finally, this is also the time of year for us to revel in children's explosion into writing.  Children between the ages of 3 and 5 are driven to put marks on paper.  Those scribbles you see are really a child's attempt to communicate in writing.  Somerville teachers engaged in the Literacy Coaching Group have focused this year on fine motor skills, exposure to print, real-life opportunities﻿


for writing, and building writing centers into their classrooms.  This group received monthly and weekly visits from district Early Childhood Coaches, and met 3 times during the year as a professional learning community to share and learn about new practices.

One of the unique things about this group is that it is made up of Somerville Public School preschool teachers, Head Start teachers, and teachers from center-based community programs at the YMCA Preschool and the Elizabeth Peabody House.  These kinds of groups are a way to create alignment between the activities happening in SPS and those in the community across Somerville - teachers learn from each other and our city comes closer to developing shared practices that benefit all children.
﻿﻿

While the Somerville Public Schools come to a close this week, early childhood education continues throughout the summer, particularly in the birth through age 4 range. Children whose parents are working require care, and our formal and informal providers in the city work year-rounds to serve children and families.  In addition, Somerville provides some programming for children who will enter kindergarten in the fall and would benefit from a "get ready for kindergarten" program.  In addition, summer is a time when teachers engage in concentrated professional development and this year SPS is providing 6 free early childhood workshops to teachers from all kinds of programs on topics such as music, art, documenting children's work, helping children who have experienced trauma, science, and preparing classroom environments. So the good work continues, year round, and stay tuned for more from our Somerville early educators.﻿﻿﻿