On Wednesday, April 13 the children of Somerville and their teachers filled the Aldermanic Chamber at City Hall with their bodies, voices, and spirit.  They were there to celebrate the Week of the Young Child, a National Association for the Education of Young Children sponsored week that raises awareness of early education and care. Children from Somerville Public Schools and local childcare centers, as well as families from Somerville Family Learning Collaborative playgroups and English classes joined to honor our community helpers in response to a letter Mayor Joe Curtatone wrote to children asking, Who are the helpers in our city and what makes them special?

An important component of this event was to engage children with City Hall.  Teachers in the Kindergarten Readiness Group (a professional learning community that brings public school teachers and center-based teachers together) read the article, Engaging City Hall (Krechevsky, Mardell, & Romans, 2014), and this inspired the group to ask the Mayor to write a letter to children. Many classrooms embarked upon research and created projects to answer this question.

This inspiring day showcased Mayor Curtatone's commitment to developing a high quality early education system that meets the needs of our diverse community.  In its second year, our Week of the Young Child celebration is now a tradition and we look forward to next year! 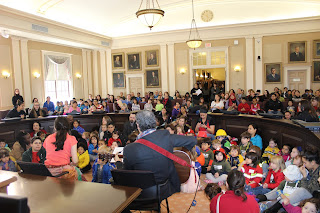 Children sang with Maura Mendoza and Guillermo Ortiz in multiple languages including a song written especially for the occasion Hola to the Mayor, voted, made art with the Beautiful Stuff Project, and interacted with police, fire fighters, and other city workers. Our high school students from the Child Development Program in our Career and Technical program read Children's Rights and student musicians heralded the Mayor with their trumpets!

Children brought the Mayor their projects about the community and they are on display in City Hall now. Children made books about community helpers, places to play in Somerville, life-sized workers, and a model of the city.  One child even came dressed as the Mayor!

Posted by Lisa Kuh, Director of Early Education at 4:52 PM No comments: