Kindness and Fairness: Somerville Celebrates the Week of the Young Child

Each year we ask the Mayor of Somerville, Massachusetts, Joseph Curtatone, to write a letter to the children of Somerville. This year's letter, coming on the heels of the election and how we addressed it with children, asked children:

What would make Somerville a kind and fair place for everyone? 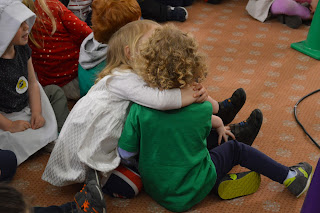 The Kindergarten Readiness Group, teachers from center-based and public school preschools and kindergartens, developed curriculum to support explorations in classrooms leading up to our Week of the Young Child celebration at City Hall in Somerville on April 27. This included:

Children came up with lots of ideas and brought their projects to City Hall to present to the Mayor.  Over 300 children gathered in the Aldermanic Chamber to sing, meet the Mayor, and celebrate the importance being kind and fair citizens.

After the ceremony in the chamber children engaged in activities all over City Hall. 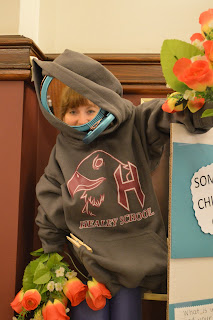 Some children wanted to make a statue with a mirror for a face, so when you look at the statue you might see what kindness and fairness looks like.

When you look in the mirror, do you see someone who is kind, fair, and works for social justice?

Posted by Lisa Kuh, Director of Early Education at 7:47 PM No comments: